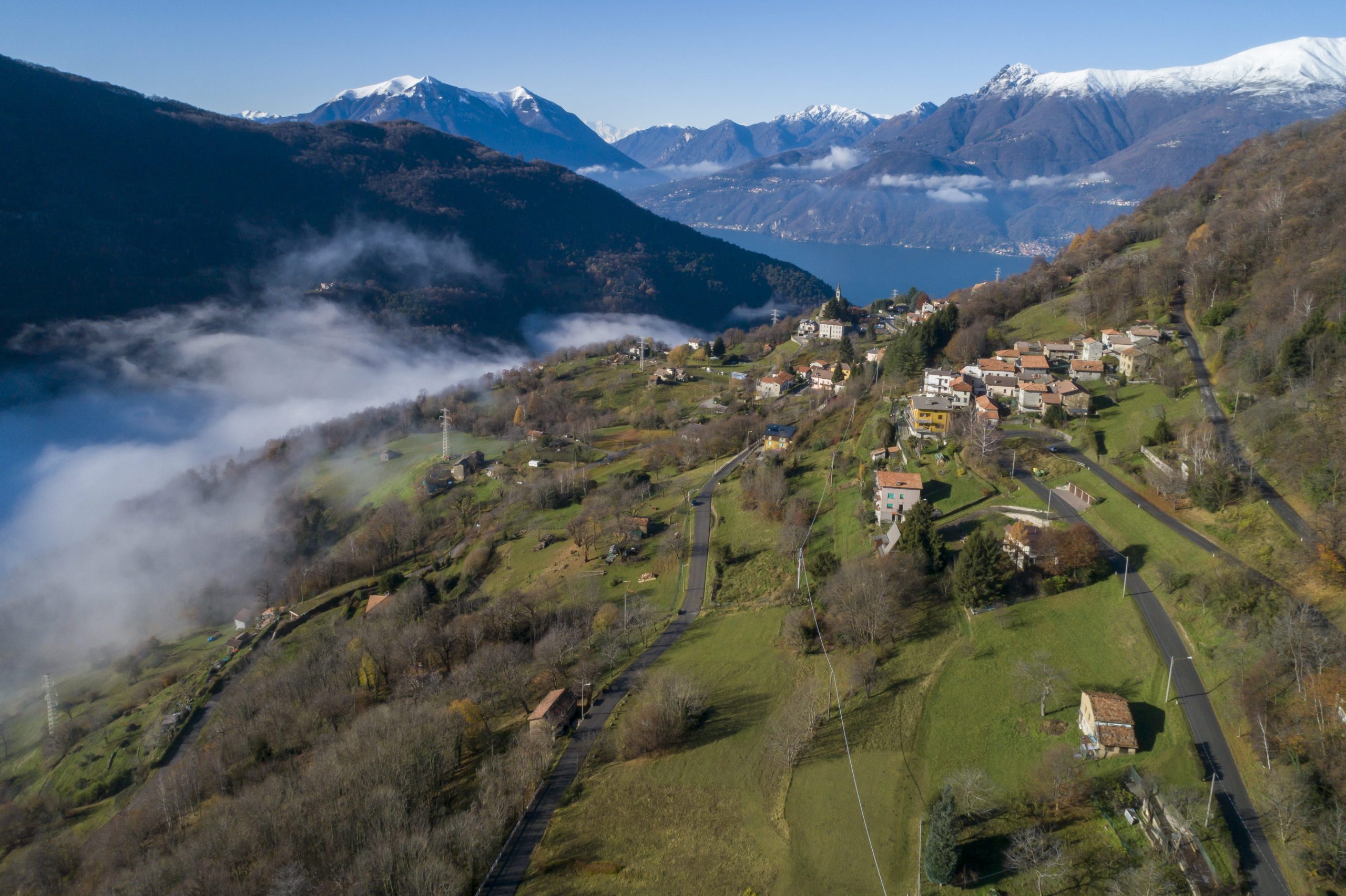 In addition to the lakeside hamlets, the Municipality of Bellano includes other villages at slightly higher altitudes that together make up the Muggiasca.

Val Muggiasca, between Bellano and Tartavalle, is a narrow gorge of post-glacial torrential origin, which extends mainly along the south-west ridge of Mount Muggio.

The latter looks like a large round mountain which stands completely alone and offers breathtaking views of Valsassina, Valtellina, Lakes Como and Lugano and as far as Monte Rosa.

The working activity was never exclusively agricultural, even if aspects linked to agriculture have been predominant in the local economy, and have given rise to the transformations of the territory that are the basis of the landscape that appears before our eyes.

The Muggiasca is made up of numerous mountain pastures and villages; the etymology of the name, in fact, is said to mean “people who live in rural villages”.

In addition to the mountain pastures of Tedoldo, Camaggiore and Chiaro, the Muggiasca has seven villages.

Because of its isolated position, jutting over the lake, the hamlet was only reached by a road for vehicles in the 1970s.

In the traditional seasonal vertical transhumance, the village was a midway station between the smaller settlements below of Oro, Costa and Pendaglio and the higher mountain pasture of Camaggiore. Noceno is also one of the oldest settlements: the church dedicated to San Gregorio Magno, in fact, is already mentioned in a thirteenth-century paper and is counted among the three earliest churches of Muggiasca. From 1711 to 1984 it was the parish seat and then returned under the jurisdiction of Vendrogno.

The etymology of the name Noceno derives from Anu+hen = water+pole, that is trunk placed across the water, probably referring to the stream that flows in the Val Grande.

The inhabited center is made up of simple and rustic buildings and, downstream in a partly concealed position under the churchyard, the bulk of what was once the school wanted by the inhabitants themselves can be glimpsed. The cemetery with the tombstones placed on the boundary walls, which looks like a snapshot taken last century or a few decades ago, is also characteristic.

Some of the main jobs carried out by the inhabitants of Noceno were those of lumberjacks and charcoal burners. The charcoal was transported over the shoulder using panniers, and was entrusted to the women who descended the steep mule tracks to Bellano.

The etymology of the name Sanico derives from Dhènek = inhabited enclosure, or village.

The village has an elongated shape and spreads along the ancient narrow main street. The church dedicated to San Giacomo is located a little further uphill, and is mentioned in the 13th century as one of the three oldest in Muggiasca.

Inside the village there are decorated doorways of buildings dating back to the 18th century that stand out for their size and richness within the territory in which they are inserted. These are the homes of those who became rich working in Venice and then returned to the village they were born in.

At the time, emigrating abroad to Venice, France, Belgium, Switzerland and America was unfortunately a necessity due to the scarce possibility of finding adequately-paid work locally. The massive flow towards Venice was due to the specialization of the inhabitants of Sanico as ironworkers, coppersmiths, caulkers and gunsmiths.

From 1935, however, the phenomenon was reversed and many Anglo-Saxons decided to buy a house here to spend their holidays. Hence the pseudonym “Borgo degli inglesi”. This happy interlude was then interrupted by the outbreak of the Second World War and then returned in the fifties and sixties.  The English scientist Cecil F. Powell, Nobel Prize winner for physics in 1950, often stayed here.

Of all the hamlets of Muggiasca, it is the one at the highest altitude, if the mountain pastures are not considered. From the churchyard of the church dedicated to San Bernardo, located west of the town in an isolated position, you can enjoy a wonderful view of Valsassina and the Northern Grigna. The village was home to iron workers who, thanks to the knowledge they developed, were able to export their creativity around Italy and the world.

There are many houses that have retained their typical nineteenth-century appearance not only in their external appearance, but also in the furnishings and layout of the interiors with the characteristic central fireplaces and tools of the past collected on the walls.

The etymology of the name Mornico derives from Mor+ni(k) = new wall, i.e. enclosed village with a new wall.

Among the various houses, the Acerboni house stands out because of the fresco that characterizes the front.

The etymology of the name Comasira derives from Hom+hiro = house+lord, that is to say village where the feudal lord resided. The legend of Taino and his treasure is linked to this figure.

Of the villages of the Muggiasca, it is the lowest, standing on an embankment protected on the sides by cliffs and overlooking the River Pioverna , opposite the village of Pennaso and the village of Parlasco, the latter important for their strategic position for controlling the access road to Bellano.

The group of houses presents interesting civil architecture with elegant fourteenth and fifteenth century entrances: the two twin doorways of the building popularly called Pretorio or Prigioni are of great value.

The small oratory dedicated to San Sebastiano rises above the village.

In fact, the oldest part of the village is located between two valleys, in a strategic position for the control of communication routes between Valsassina and Lake Como. Indeed, the mule tracks coming from Taceno, Margno and Narro pass through Inesio and join the ancient road to Bellano.

Already inhabited in Roman times, as proven by the important finding of a clay jar, the settlement was equipped with towers that were part of the wider medieval defense system, and was the location of a garrison fro troops of the Duchy of Milan who fought and defeated the Venetians in 1453.

The presence of the oratory of Santa Maria Maddalena is already mentioned in the 16th century.

The etymology of the name Inesio derives from In+ez = rivo+acqua, i.e. houses located between a brook and a water stream. In the oldest documents it is mentioned as Loco Incresso and, later, as Villa Agnese.

Upstream of the town, along the Valle dei Mulini, on the mule track to Narro in the locality of “Torre”, there is a large building: it was the spooling site belonging to Ingegner Giglio, run by the Gavazzi silk industrialists, which later became a summer holiday camp and is now a holiday home for groups and families.

It represents the smallest village of Muggiasca, located halfway between Vendrogno and Inesio, surrounded by many terraces made of dry-stone walls, once perfectly cultivated.

Its small church dedicated to San Rocco, built on the eastern edge of the town, is also small.

The etymology of the name Mosnico is said to derive from Moot’z+ni(k) = village+new, i.e. recently built village.

The centers of Vendrogno and Bruga, which in ancient times were separate from each other, are now the main town of Muggiasca. Once upon a time, coming from Bellano along the old mule track, you would have found yourself in front of Bruga: a fortified village perched above an escarpment about ten meters high, today completely hidden by the great mass of Collegio Giglio. Almost as a protection of the ancient settlement, on the walls of the two lateral buildings, there were two fourteenth and fifteenth century frescoes; the first represents a valuable Madonna and Child, attributed to the Zavattari workshop that operated in the late fifteenth century, now restored and preserved in the church of Sant’Antonio.

The second, visible on the corner building with access to the mule track to Noceno, represents the Holy Trinity.

At this point in the village you can also see a very complex building: a tower-house to which other buildings have been successively attached, constituting four blocks, which define an inner courtyard that can be accessed through three entrances with covered passages with two stone gateways.

Another interesting architectural aspect is located at the corner of Via Roma and Via per Noceno: until the beginning of the 20th century, this building was the manor house of the Giglio family, one of the main families of the village. Another architectural sign to look for is the cross on the entrance to number 16, also in Via Roma, which testifies to the stay of a bishop who fled from Milan at the time of its destruction by Uraja (538-539 AD)

In the agglomeration of houses in Vendrogno with Bruga, there are now fourteen doorways, with a mainly arched structure, from different eras but starting from the medieval one, which were used to close and protect the precious presence of an internal water source. At the start of the twentieth century, in one of the courtyards hidden by these entrances, the local Doctor Casanova found a white marble memorial stone from Musso, with a partially decipherable inscription, dating back to Roman times and now on display in the Como Civic Museum. Most of the entrances are located along the central Via Roma, where it is also possible to visit the MUU, Museum of Milk and the History of Muggiasca, in the former dairy turnaria of the village.

At the end of the street in this ancient village stands the small church dedicated to St. Anthony, characterized by series of frescoes inside and outside, while completely detached from the houses, on a hill at the edge of the village and with a panoramic view, stands the Sanctuary of Our Lady of Loreto, for all “La Madonnina”.