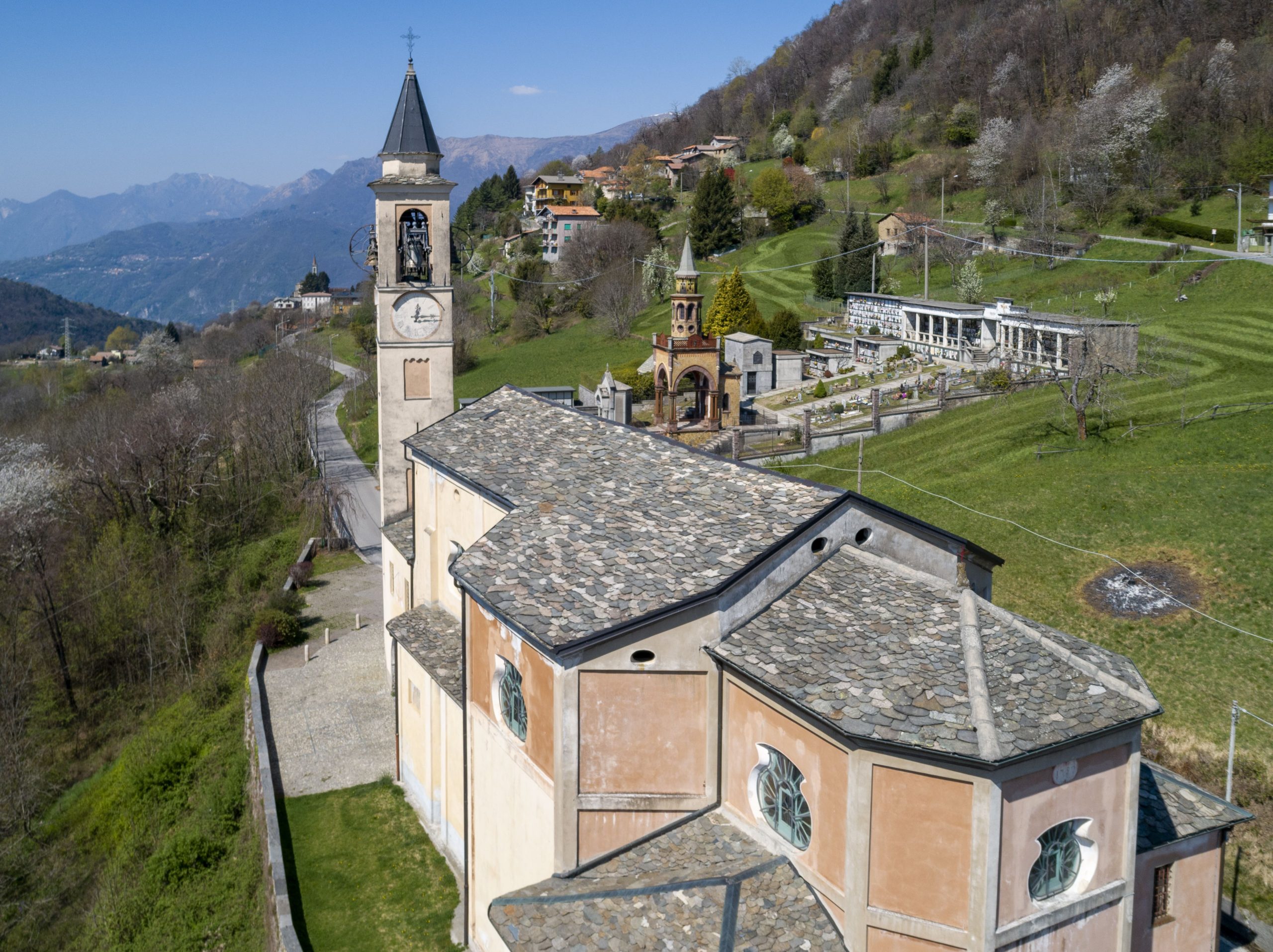 Situated in Vendrogno, the church of San Lorenzo is one of the oldest in Muggiasca.

The date of the foundation of this church is not known, however, according to popular tradition, it was built over a period of fifteen years by some master craftsmen who settled in the hamlet of Comasira, a little further down the valley, while working on it.

Already mentioned at the end of the thirteenth century in the list of Liber Notitiae Sanctorum Mediolani by Goffredo da Bussero, in which it is stated that in Muggiasca there were only three churches, San Lorenzo in Vendrogno assumed the title of parish church in 1368, when it was detached from the provostry of Bellano. It then went under the jurisdiction of the parish of Primaluna, religious capital of Valsassina, and then returned to depend on Bellano following the establishment of the recently constituted pastoral unit.

The religious complex is located outside the center of Vendrogno, actually further from the town than it is from the village of Inesio. The reason that led to the choice of this place is strictly defensive-military: its bell tower, dating back to the Romanesque period as shown by the small suspended arches and some other elements that have survived the subsequent changes, was part of the defensive system to guard the Upper Valsassina.

Its bell tower was part of the defensive system to guard the Upper Valsassina.

Once separate, the tower is now connected to the body of the church through a portico on the ground floor on which rests the Hall of the Confraternity of the Blessed Sacrament completed in 1730. The founding act of the Confraternity, kept in the parish treasury, is dated January 5, 1584 and bears the autograph signature of St. Charles Borromeo.

In the 19th century, the belfry was raised and the group of 5 bronze bells was replaced. In 1942 the bells in Vendrogno were subjected to requisition: in San Lorenzo the two larger ones were removed, but after the war they were immediately returned.

The beautiful hall, with a wooden choir and coffered ceiling, has numerous paintings by the artist Giuseppe Ambrosoni dating back to 1746 and also contains some metal plaques depicting the Patron Saints of Muggiasca by the artist Luigi Tagliaferri who made them at the beginning of the twentieth century. Today it is the seat of the rebuilt Confraternity of Candelott and can be visited on the patron saint’s day or during special cultural events.

Prior to the construction of the great hall, the facade of the church was decorated with numerous frescoes, which have now mostly been lost. The martyrdom of St. Lawrence and the lower part of the body of a large St. Christopher survive.

The present front is more modest and has a pink plaster background, tripartite with four grey pilasters and crowned by a curvilinear tympanum with the Saint in the center.

The current appearance of the complex is baroque, the result of the extension work carried out in the mid-eighteenth century and only the orientation remains of the original form .

The interior is very bright and contains valuable works of art such as a tabernacle dating back to 1547, painted choir stalls, carved wooden furniture and a 14th century San Lorenzo. The high altar is in neoclassical style and was built in the first half of the nineteenth century, in conjunction with some restoration and expansion works that lasted a decade. The church is also equipped with a pipe organ built by the company Inzoli of Crema.

The parish treasure is rich in works that testify both to the deep faith of the inhabitants and to their culture: not uncouth mountain dwellers but people sensitive to beauty, in contact with distant lands and artists.

In addition to the 13th-century wooden statue from the oratory of San Grato, the encolpion discovered in the church of San Sebastiano, the gold and sacred silverware also from the former parish of Noceno and the finely embroidered banners, the parish archives preserve one of the most important manuscripts that hand down the ancient Ambrosian chant: a two-volume Antiphonary completed in 1387, by the Milanese copyist Fazio de’ Castoldi, in honor of San Lorenzo of the community of Muggiasca. Another treasure is a copy of the Mottetti C printed in Venice in 1504 by Ottavio Petrucci: one of the few existing and among the most complete in the world.