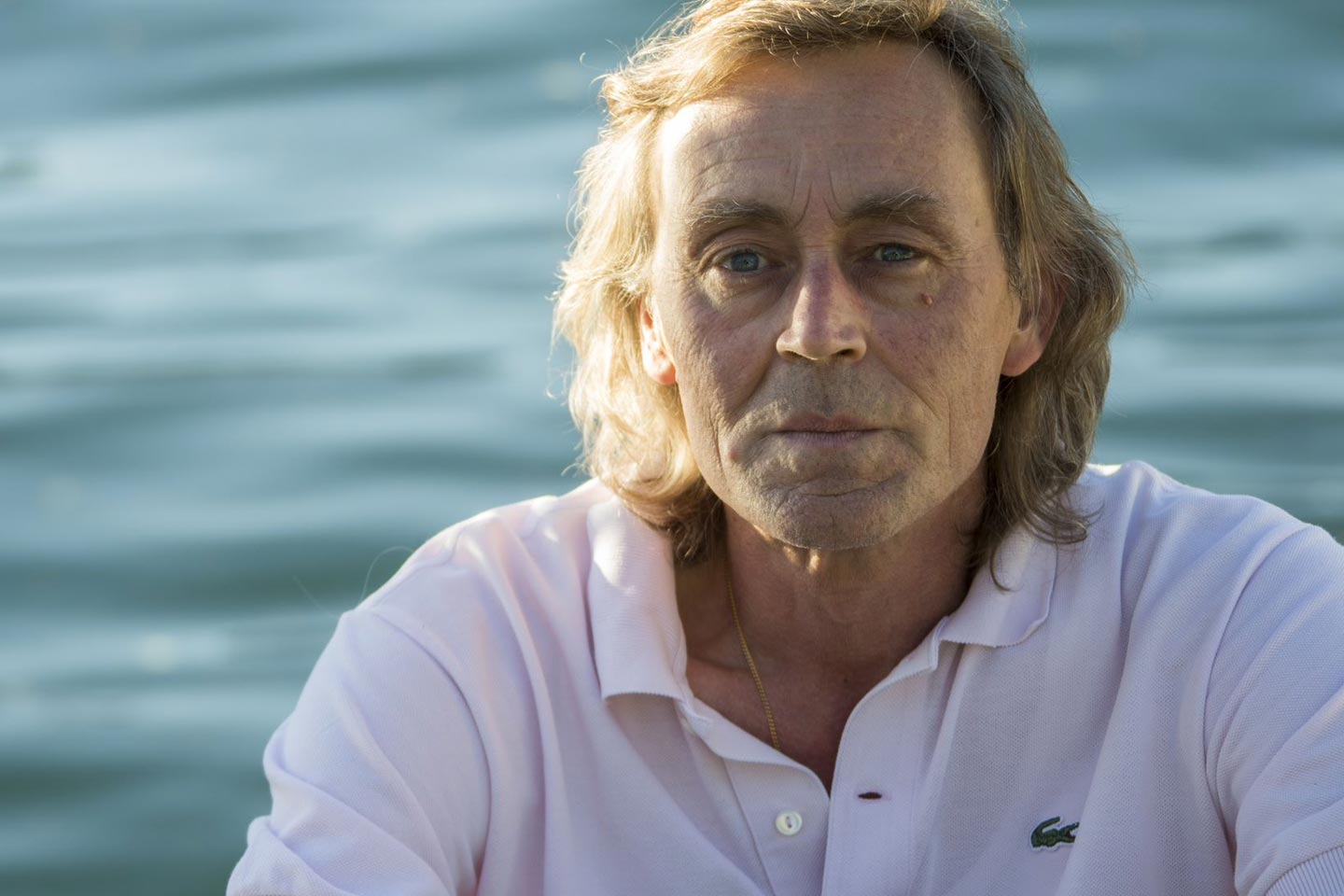 Anecdotes, gossip, real adventures that I had heard… And if I had already heard so many, who knows how many were still waiting to be discovered.

Andrea Vitali was born in Bellano on February 5, 1956, to Edvige and Antonio Vitali, who worked in the town’s municipal offices. The eldest of six siblings, he lost his mother at the age of seventeen and was raised by his father with the help of his aunts.

He studied in Lecco where he attended “the very strict Manzoni High School”, as he himself defined it, and then in 1982 he graduated in medicine at the State University of Milan, putting aside the aspirations he had towards journalism, which his father did not share.

He married Emanuela, with whom he had a son Domenico, and for twenty-five years he worked as a general practitioner in Bellano but, in 2008, he abandoned the profession to devote himself entirely to writing. However, in 2020, he momentarily resumed his work as a doctor following the COVID-19 pandemic.

“I confess that from a young age I felt the need to write, to use writing as a means of communication with others.

As a confession, I realize, it’s not much, but I can’t start anywhere else to try to explain how I came to tell a certain kind of story.

In the beginning, then, it was writing, not conceived as a solitary exercise – no diary in my childhood or even in my youth – but as an experience to be shared. I mean, I needed someone to read my writing.

Listening to my father I had the idea of writing a novel, The Prosecutor, was my starting point.

The first opportunity that presented itself to me was, when I was about fifteen years old, a young girl to whom, rather than speaking –  given her innate shyness – I began to write passionate letters of which I hope there is no longer any trace. At a certain point, the dark-haired girl found someone else, a practical guy who was not very familiar with letters: but he had a moped and that was enough to end the story. I suffered the right amount, pouring out my suffering in heart-rending poems: of their fate I know nothing more, though I hope they have met the same end as the above letters. Suffering, as you know, fortifies and the pains of love at that age are suffering in its purest form.

Once I had calmed down I thought I could see clearly into my life and my future. A few years had passed in the meantime. I had found another girlfriend, I was attending classical high school and I kept wondering what to do with this need to write, in which direction to turn it. I finally understood: I had to be a journalist. Easy to say. It wasn’t so easy to go and tell my father who had staked more than one card on me, his firstborn, otherwise he wouldn’t have enrolled me in high school.

I tried, anyway. On the strength of my readings of the classics, I organized a beautiful speech, an argument so logical that it would lead the beloved and feared parent to the same conclusion as mine: being a journalist was my job. My father let me do it. I mean, he let me talk. I spoke for the quarter of an hour that my speech lasted without being interrupted. Finally, having let a half-minute of silence pass, he responded: “No.”

My career as a journalist ended there. I continued my studies, I went to university, even though in the midst of all my commitments that hidden, daily, lively need to use writing to do something with it never left me.

And it was thanks to my father that I eventually figured out how I could direct that need.

My father, it must be said, was a man of few words: home, work, news and then to bed, where he often stayed up late reading. It was his rule and, as time went on, it became mine as well. To which he occasionally made an exception. In that case he chatted a little more and told stories, adventures that had happened to him when he was young or that he had heard about from others. It happened infrequently, more or less every time the seasons changed. It was during a change of season, from spring to summer, that listening to him I had the idea of writing a novel, the first one, The Prosecutor.

It was 1988, the month of May. We had just finished our dinner in the kitchen, but the door, which opened onto the terrace by the lake, had been left open, so that, like a spice, the thick smell of still, dark water had invaded the room. The scent of the lake in summer is inebriating. Rich, sometimes heavy. You have to know how to carry it and, also, bear it. I experience this all the time, even now, so many years later.

Inebriating, because it amplifies feelings, expectations, or memories. In short, if you are young – as I was in 1988 – it instills confidence in the future, inviting you to look at it with courage. If you are no longer young – and my father was 68 at the time – it makes you indulge in happy memories, it deludes you into thinking you can find the pace of your youth, the song you loved so much, the profile of an old girlfriend and so on.

So it was that my parent let himself go on the wave of memories and since his generation had their lives sadly blighted by war, he told war anecdotes. I remember the adventure of a salami, which left Bellano with him to travel to the island of Rhodes and then ended up, mysteriously, in the belly of a cat; and that of a long afternoon spent sitting on the wing of a reconnaissance plane that glided, due to failure, into the open sea. There are, as you can see, no dead or wounded: I don’t think my father ever fired a gun at anyone, he went to war because he was forced to, like many others, and like many others he came back with a load of stories that were sometimes useful to his children.

The same thing happened with the episode that gave rise to The Prosecutor, even though there is no trace of the war in this novel: in fact, if it is true that it happened during the Second World War, it is equally true that it takes place in a sort of parenthesis, that is, during a leave of absence that my father spent partly in Milan. You don’t even find the fact itself, to be honest: its dynamic rather, the idea of an escape along a circular track, where you’ll eventually find yourself back where you started.

So The Prosecutor was my starting point; 1988 the year I began stealing stories to then return them written on paper. But also the year I began to rethink the countless stories I’d already heard and were just waiting to be told.

Anecdotes, gossip, real adventures that I had heard, often during the oceanic Christmas gatherings, through the mouths of Aunt Rosina, Aunt Euphrasia, Aunt Mirandola, Aunts Colomba, Cristina, Paolina, Uncle Esilio and many others, real or likely characters of my life. And if I had already heard so many, who knows how many were still waiting to be discovered.

Since then I haven’t stopped thinking about the ones I already know and searching for the ones I don’t know yet. And, to tell you the truth, I have no intention of doing that at all.”