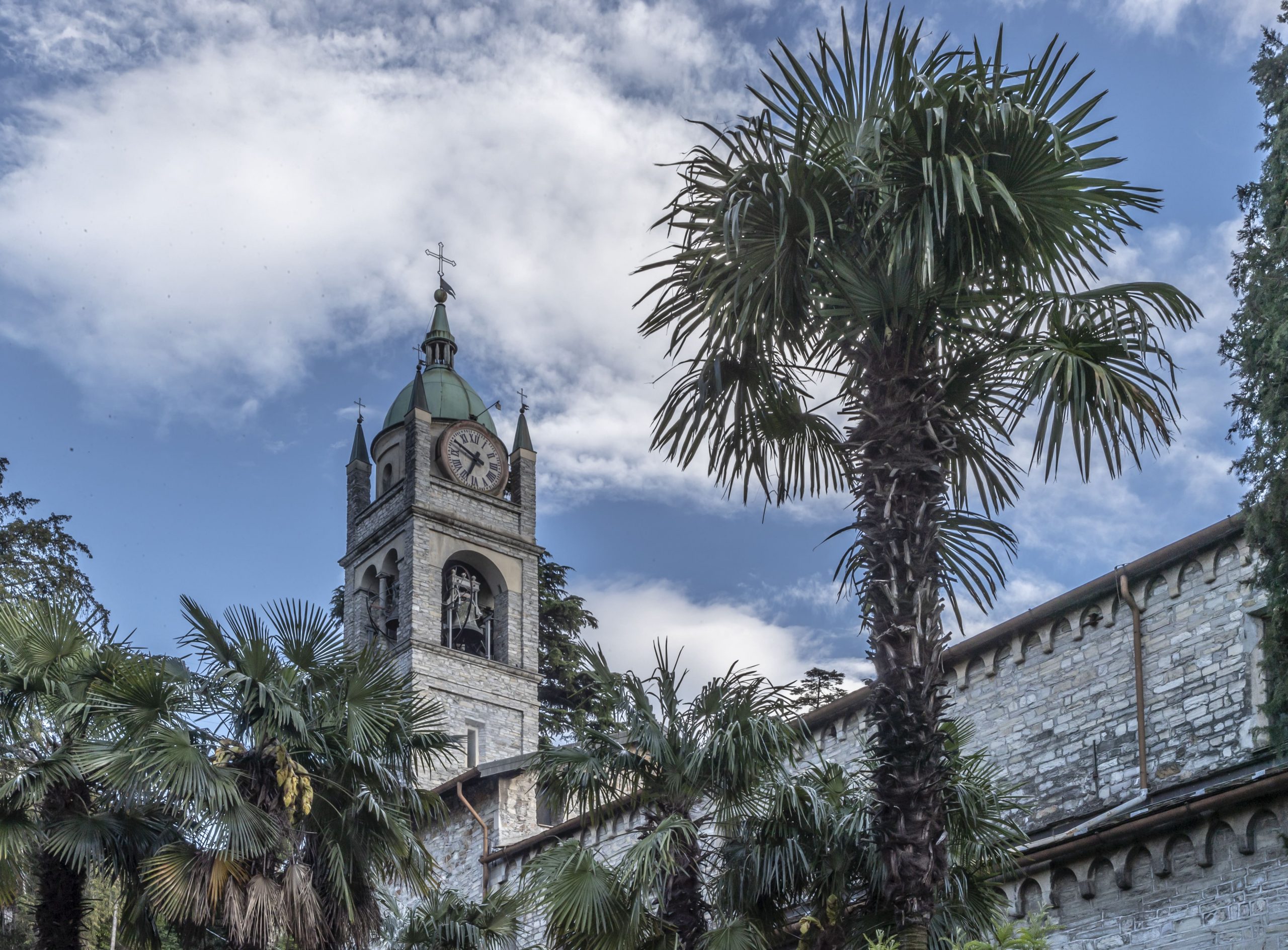 The Church of i Santi Nazaro and Celso

The provost church of I santi Giorgio Nazaro and Celso, built between 1342 and 1350, is the parish church of Bellano.

It was probably built to replace the primitive little church dedicated to the Virgin Mary that stood not far from the lake, between Coltogno and the Pioverna stream.

On September 9, 1341, during a great flood, the waters broke the banks and destroyed the church and, when it was decided to build a new one, a higher place was chosen, sheltered from the violence of the waters. The original structure envisaged the construction of three naves with four spans, an apse to house the high altar and two bell towers, on the model of Sant’Abbondio in Como. During the 16th century, the bell towers were soon removed from the project and their foundations were adapted to house two minor altars at the sides of the main one. The bells, therefore, found a temporary location on top of the main facade.

A subsequent reworking of the original project saw the demolition of the small apse, which was replaced by a larger one and extended by one span to accommodate the new altar and the choir.

In addition, this room was vaulted at a higher level, as shown by the pillars on which the pulpits are anchored and where it is possible to see the impost of the original arch.

The current bell tower was, however, only built in 1567. Its height makes it clearly visible, especially for those coming from the lake.

The high alta is the fruit of the people of Bellano’s great generosity,created entirely thanks to numerous and continuous donations.

The façade, characterized by alternating black and white marble bands, measures 17.30 m in height and 18 m in width. It has a tiered pattern and a salient scheme and is tripartite following the internal subdivision of the naves. The division is made with pilasters connected to each other at the top thanks to the succession of small hanging arches typical of Romanesque architecture. At the base there are three openings surrounded by small beam columns and surmounted by pointed lunettes, once frescoed. The paintings on the minor doors have not survived, while the one in the central lunette is now preserved inside the church and portrays the Virgin enthroned with a royal mantle and crown holding the holy child with the Saints Nazarius and Celsus at her sides. Above the entrances there are three circular windows: the lateral ones of modest size, are surrounded by white and black ashlars, the central one, however, turns out to be a real rose window, surrounded by valuable terracotta painted green. The innermost ring is made up of intertwined Gothic arches followed by four rings with floral decorations separated by strips in the shape of spirals, ribbons and cords. In the center the stained-glass window represents the patron saints Nazaro and Celso. Between the latter and the main portal is a Gothic aedicule containing a high relief of St. Ambrose, patron saint of the diocese.

Other friezes are found on the keystones of the entrances on which, starting from the left, we find a blessing hand, a lamb with a Greek cross and a Latin cross. Above the small round window on the right there is a stem of lake grass, also recurring in some Renaissance paintings. Finally, on the central pilasters, there are the Visconti family coats of arms: a snake flanked by the letters I O, and that of the Torriani family: a tower flanked by the letters A N.

Inside, the most valuable decorations are the floor in black and white dual-coloured marble, which takes up the facade, and the frescoes of the nave. It rests on quadrangular pillars in Moltrasio stone that support cross vaults.

This type of roofing is certainly an addition that is the result of the various redesigns that have taken place over time; originally, in fact, the nave ended with simple wooden trusses on the roof.

The frescoes in the vaults date back to the Renaissance period, as can be read on the two signs painted in the vault above the organ.

Starting from the entrance, the frescoes in the vaults represent:

The sub-arch before the next span contains frescoes representing Adam and Eve and six sibyls.

The next sub-arch contains the representation of eight prophets separated from each other by signs  that bear the main prophecies about the coming of the Messiah.

The next sub-arch again shows some sibyls but no mottos.

Inside the Church of Saints Nazaro and Celso

The paintings of the side walls, finally, contain spirals with busts and heads of angels holding eight large medallions depicting the patron saints of the main hamlets of the parish. Each group of angels and medallions is surrounded by chiaroscuro arabesques.

The high altar, originally made of carved and gilded wood, is now a monumental composition of polychrome marble, friezes and statues. It is the fruit of the people of Bellano’s great generosity as it was created entirely thanks to numerous and continuous donations from poor families, small landowners and humble workers.

In the center there is a small temple with the function of a tabernacle with the profiles of the apostles’ heads on the sides. Above the large statue of the Sacred Heart with at the sides, between the pillars, the Saints Nazarius and Celsus and at the edges two adoring angels. The altar is crowned by a triangular pediment containing the eye of faith with golden rays surmounted by a podium on which three sculptures rest, depicting Faith and Hope with the figure of the Savior in the center.

To the left of the high altar is the chapel dedicated to the Virgin of the Rosary, decorated with plaster and gilded stucco, whose walls contain oil paintings portraying the mysteries of the rosary. The gilded wooden altarpiece with niches containing sculptures of the Virgin and Saints Nazarius, Celsus, George and Ambrose is of great value.

To the right of the high altar is the chapel of St. John  the valuable altarpiece stands on which the main events of the saint’s life are painted.  The canvas painted in tempera depicting the Madonna of the Roses is also worthy of note.

Another noteworthy artistic element is the baptistery, located near the left entrance. It dates back to the 17th century and is composed of elements in black marble from Varenna and red marble. It consists of monolithic columns surmounted by a high Baroque trabeation with the baptismal font in the center made of black veined marble from Varenna. 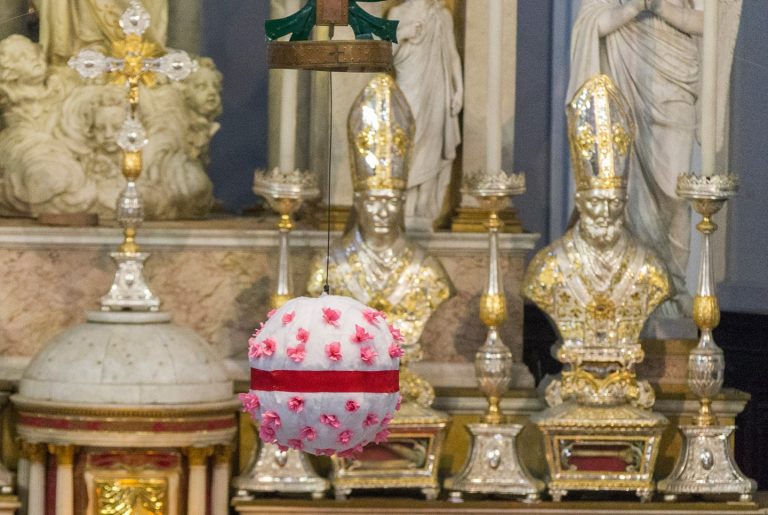 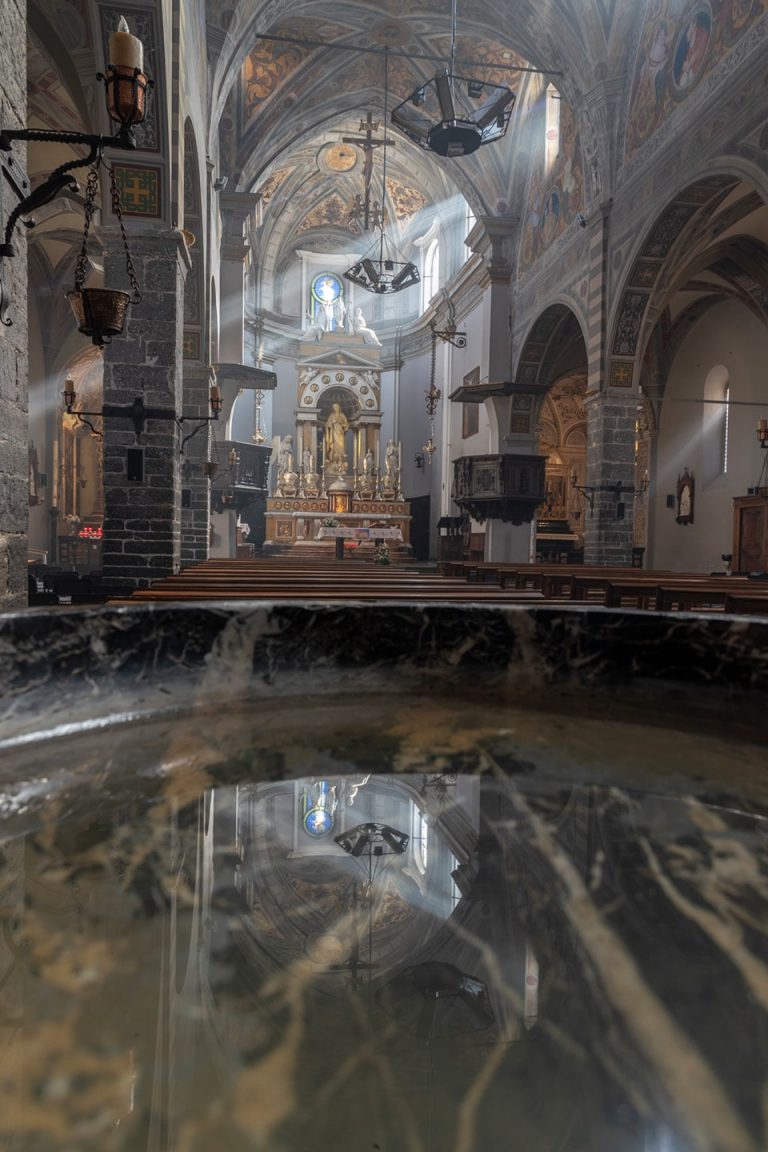 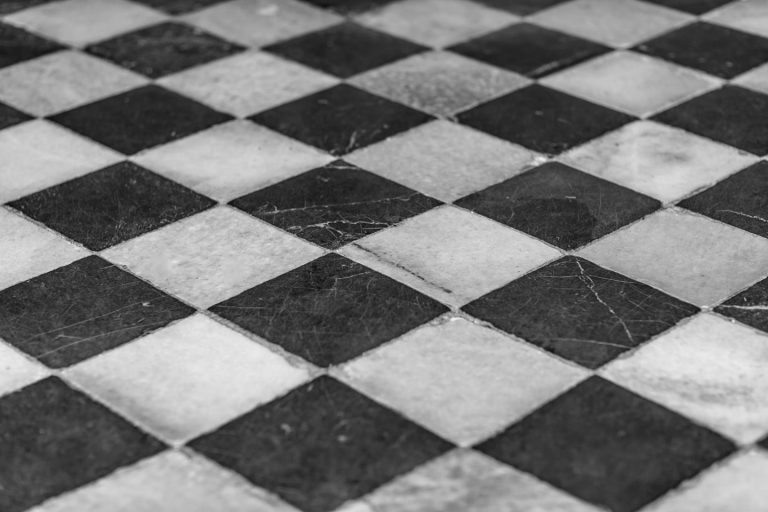 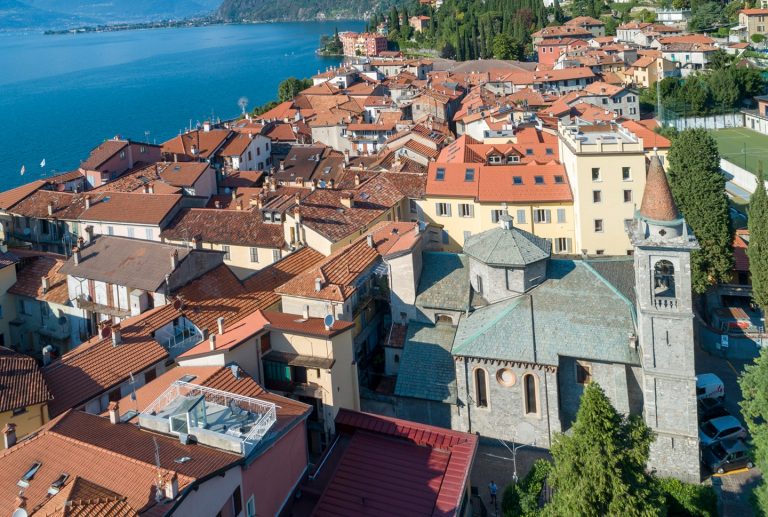 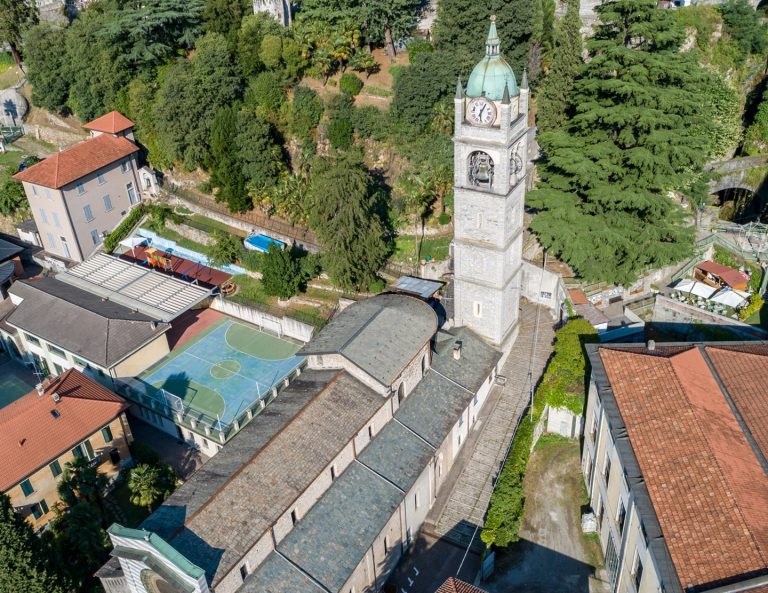 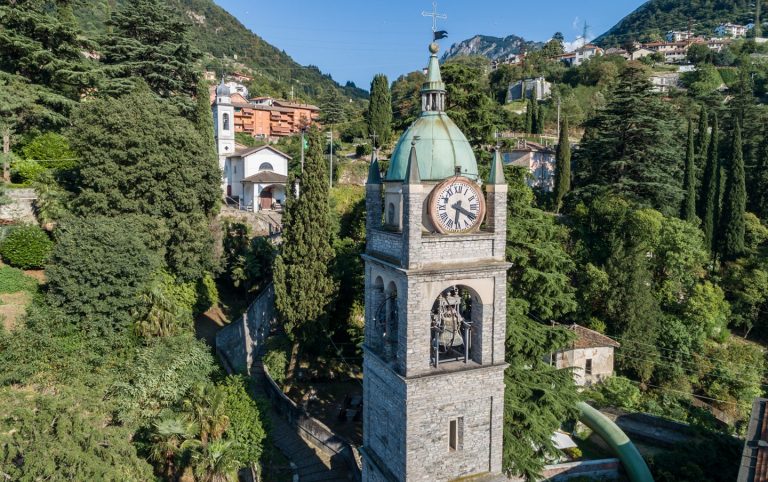 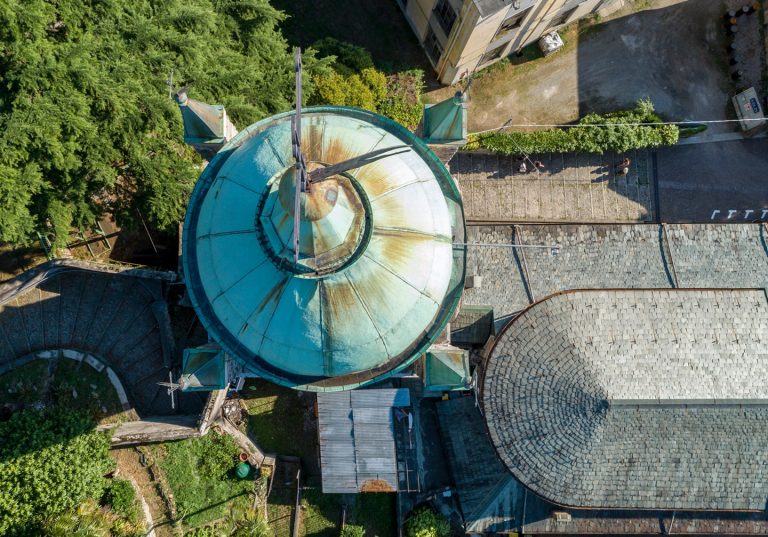 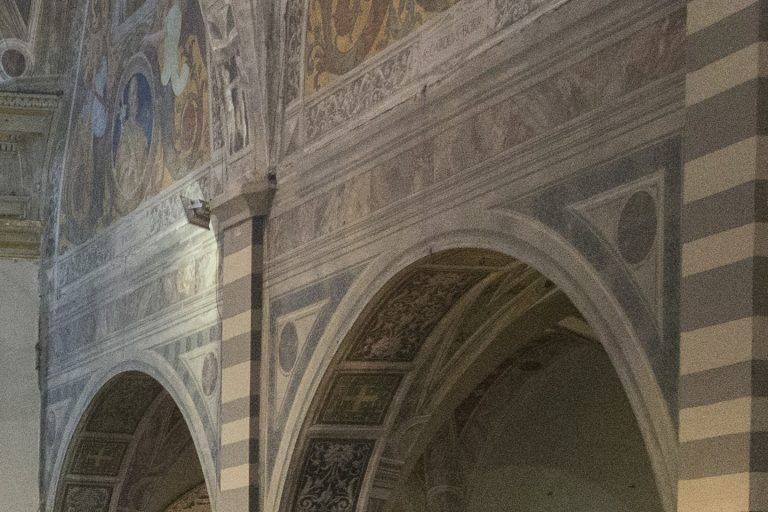 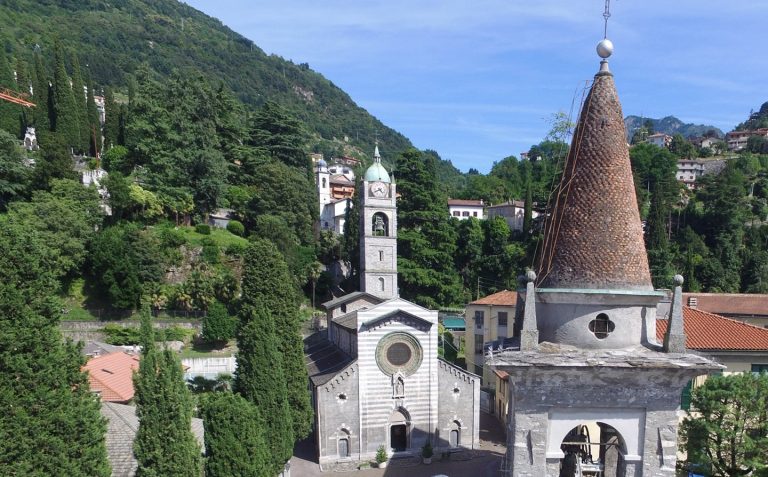 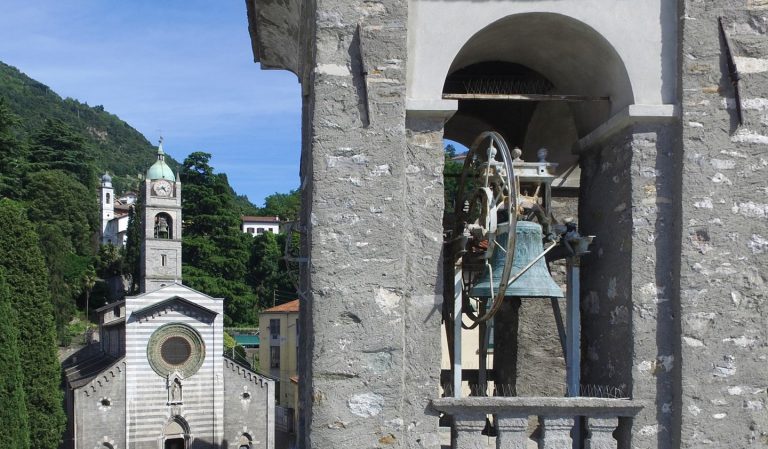