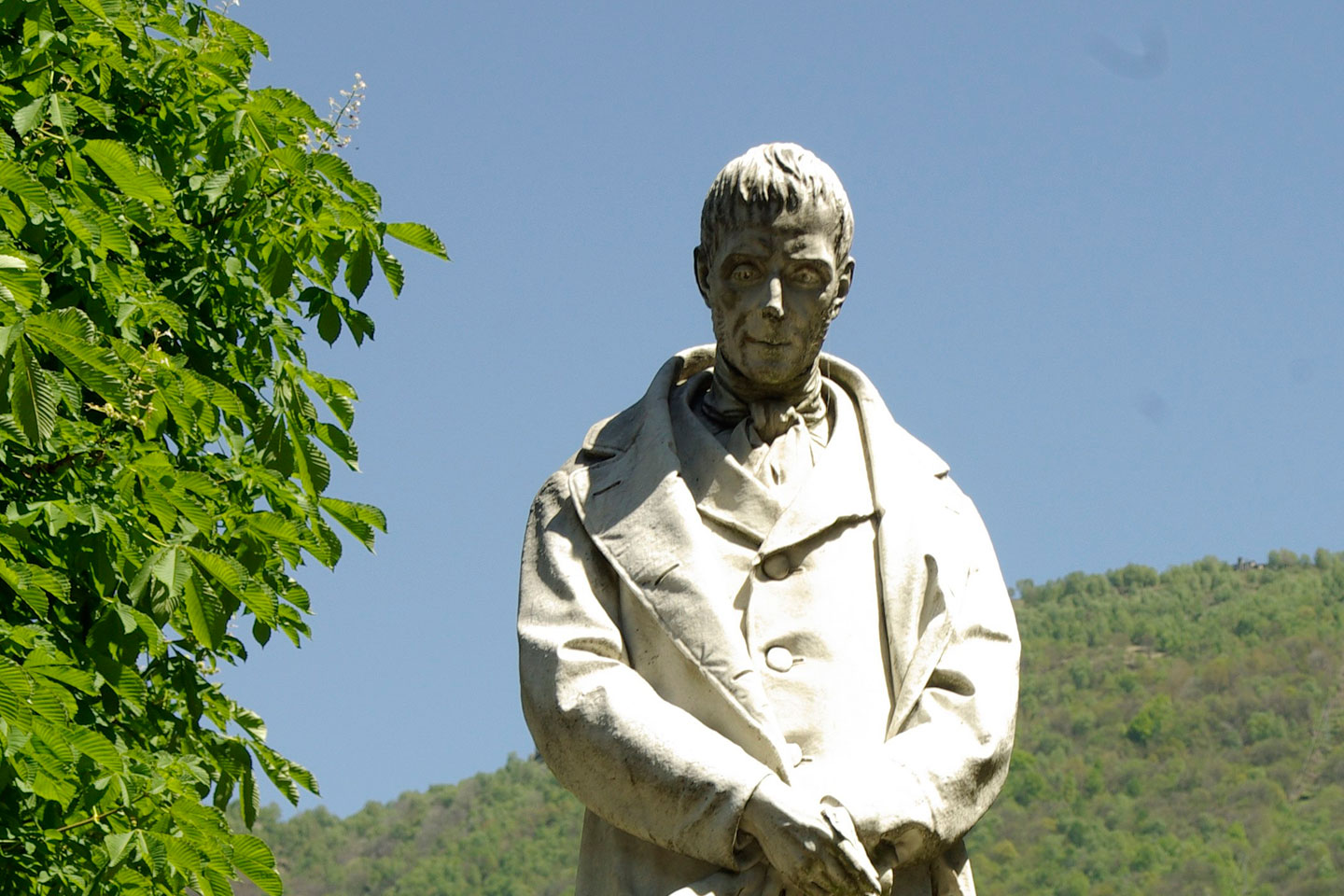 Tommaso Grossi was born in Bellano on January 23, 1790, into a modest family, the second son of Francesco and Elisabetta Tarelli.

He attended school in Treviglio but, at the age of nine, was sent to study in Lecco, at the seminary of Castello, by a canonical uncle. He then moved on to Rezzonico and finally to the Brera school in Milan.

After finishing high school, he started attending the University of Pavia where he graduated in 1810 in Law. He then found employment in Milan at the offices of a lawyer where he remained even after his qualification. Alongside his working activity, Grossi began to develop a strong attraction towards cultural environments; in particular he became interested in literary studies.

Thus, in 1816, Tommaso Grossi published the Prineide, albeit anonymously: a satirical poem written in Milanese dialect, made up of sestets with hendecasyllables.

The choice of dialect and satire were a direct consequence of his association with the so-called friends of the Cameretta, including Carlo Porta, with whom he established a strong  friendship and whose death he remembered with the Milanese sestet In morte di C.P., authentically moving and of good poetic value.

Grossi was responsible for the drafting of the act that, in 1848, sanctioned the annexation of Lombardy to Piedmont.

It is thanks to this writing that he succeeded in imposing himself on a wider panorama thanks to the publication, the following year, that he himself edited, transcribing the text from dialect to Italian.

If the passage from dialect to language meant the hardening into more conventional forms, at the same time it became the necessary instrument for a wider diffusion of the novella, which achieved extraordinary success, so much so that it immediately imposed itself as one of the most significant fruits of the new literary school.

Grossi wrote his second novella in verse, Ildegonda, directly in Italian, characterized by a broader structure than the previous one. We know of its composition from the correspondence between the friends of the Cameretta from 1818 onwards; and Manzoni, writing to Grossi from Paris on 6 April 1820, hoped to find it completed.

Ildegonda marked the definitive abandonment of dialect in his literature and was the answer to the question of which language to adopt, something that was particularly felt in the Milanese Romantic circle. Fundamental to this choice was the influence of Alessandro Manzoni who, also in terms of living habits, was very important; so much so that from 1822 to 1836 Grossi lived with him as his secretary, occupying the rooms on the ground floor of his Milanese home.

Worthy of note, also by Manzoni who inserteda still unpublished verse in the Promessi Sposi, was his next work I Longobardi alla prima crociata: a ext divided into 15 canti of 1205 octaves published in Milan in 1826. Although its success among readers was immediate and wide-ranging, the same was not true for the critics, who sparked off a fierce debate by giving negative judgments.

In 1836, on the occasion of the marriage between Alessandro Manzoni and Teresa Borri, Tommaso Grossi left his friend’s house and a year later, published his last novella in verse: Ulric and Lida.

On 17 December 1838 he married Giovanna Alfieri and, in the same year, he took the exams to become a notary, after having practiced in a firm. After passing the exams he returned to Milan where he practiced his profession, with great success: in fact, Grossi was responsible for the drafting of the act that, in 1848, sanctioned the annexation of Lombardy to Piedmont.

With the return of the Austrians to Milan, Tommaso Grossi found refuge in Lugano and Belgirate, where he met Manzoni again.

Once things had calmed down, in October 1849, Tommaso Grossi returned to Milan where he died on December 10, 1853, struck down by meningitis, without seeing its liberation.